The Making: Scuba Dude Cake and his Underwater friends 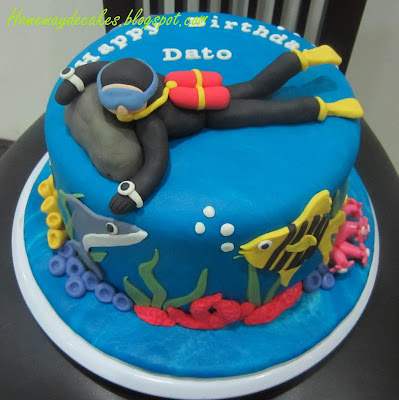 Hi peeps!Today I'm gonna talk about the making of a scuba diving inspired cake. As you can see it has a scuba diver on top (I call him scuba dude) and some of his fishy friends below in the deep ocean. It was not a hard design to make but took equally as much time as my other more complicated designs prior to this. So let's get on to it! 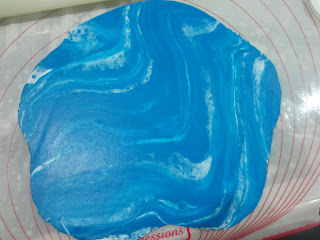 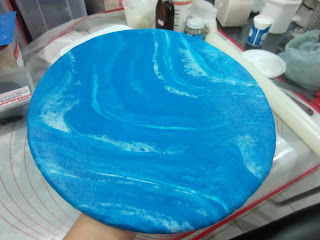 Before starting anything, I covered the board with fondant made with a marbled effect.It's very easy just add a little white fondant to blue fondant and roll it out. It will the turn out looking like 'waves' in the sea. 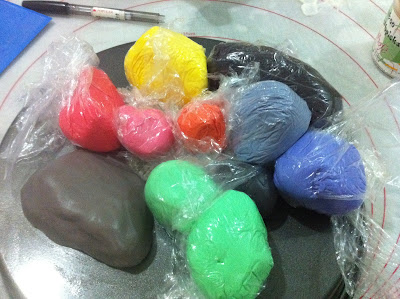 As with all the designs that I do, I will prepare the coloured fondant first.This will save you time when you start decorating in the end. I started by making the figurine first as this is always the first thing that needs to be done in order for it to set. I prepared the basic shapes like this pic and had it propped against the 'rock" so that it looked like he was resting on it while diving. 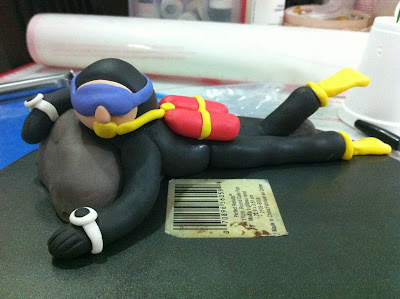 Next I finished up the tiny details such as the SCUBA tank, goggles. flippers and underwater watch. I left it to 'dry' for a day or two. Funny story with this scuba dude because he was meant for another cake but due to unforseen circumstances his cake was cancelled. He was finally adopted by another client and you know I could almost see him smile after that..:) 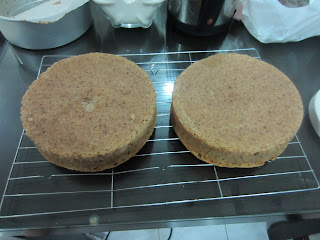 Next the yummy cake. This is a butter walnut cake. I baked two times enough for a two layer cake. 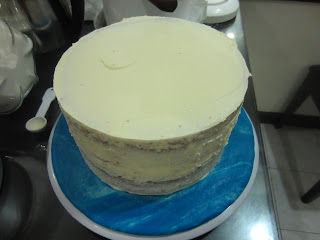 Next I covered and filled it with vanilla American buttercream. 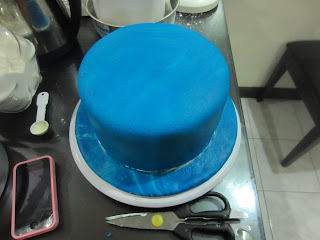 Then I covered it with ocean blue fondant. 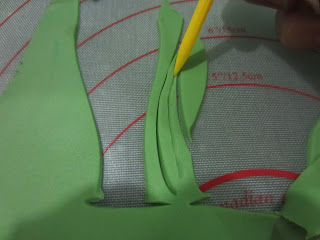 To make the underwater seaweed, I just cut random shaped strips and lined the middle with a veining tool. 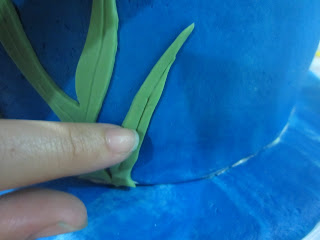 Then stuck those greenies on. 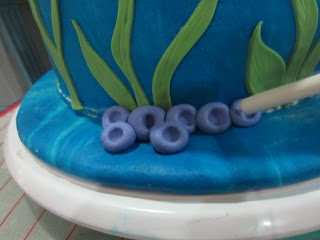 For the purple corals, I made little balls and indented it with a round edge tool. 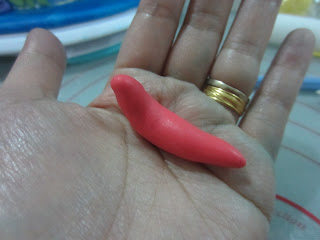 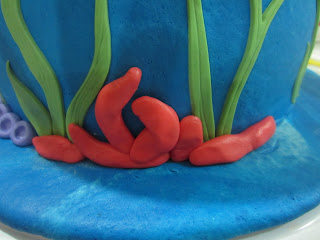 To make the red corals, I just rolled out fondant  with two tapered ends and then stuck them first unto the cake. 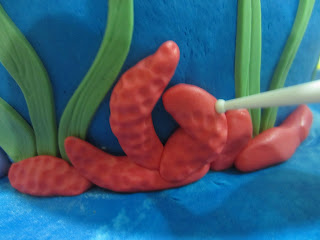 Then I indented it again with a smaller round edge tool creating the coral effect. 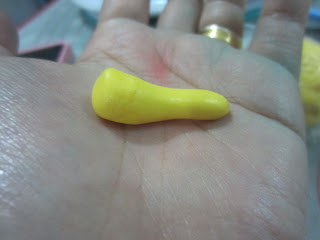 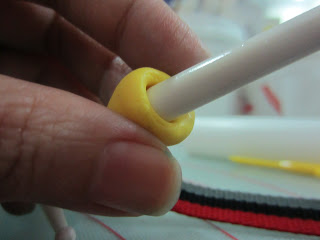 Next up the yellow coral. I rolled the fondant somewhat like a cone. Then poked the larger end with a round end tool. 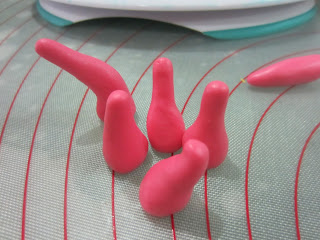 Next the pink flower anemone. I rolled fondant to look like bowling pins with various sizes. 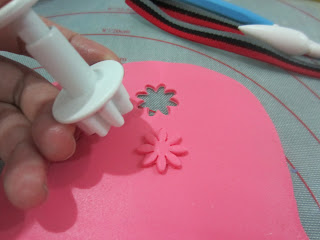 Then I made the petals with a small flower plunger cutter. 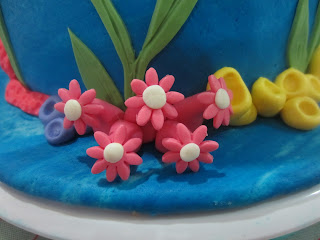 I then stuck the petals on to the smaller tip of those 'bowling pins' and added a white center. 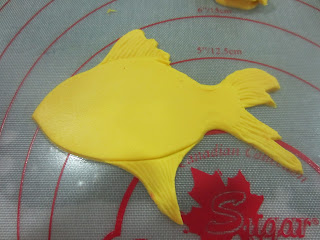 Next up our friendly sea creatures. I cut out the shape of fish that I want and created the fins and tail using the veining method. 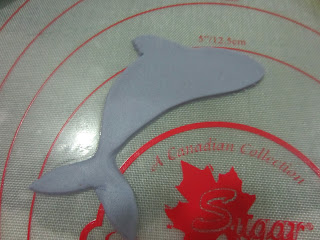 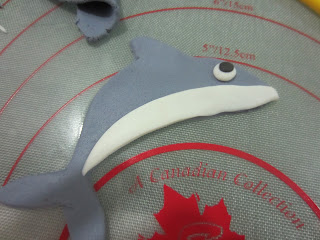 The dolphin was the same except I only added the white stripe on the bottom. 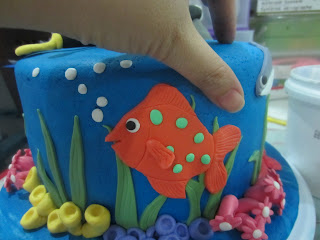 Then I arranged them all on the side of the cake. I added little details like the eyes, spots on the fish and bubbles. 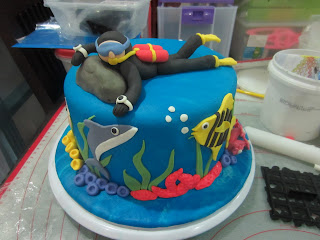 Finally I put scuba dude to crown the cake with his hand as if trying to touch the dolphin. 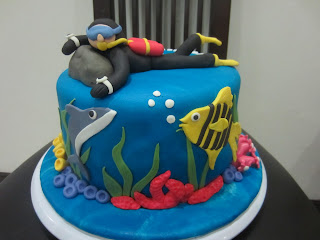 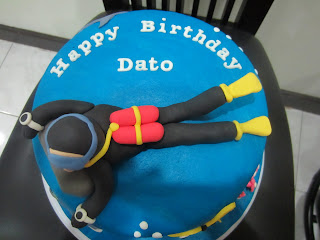 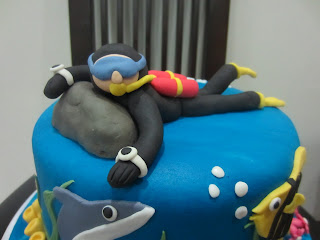 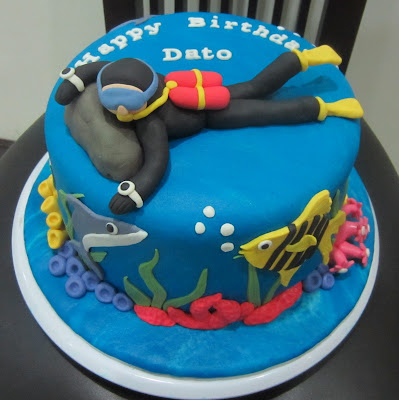 So there you have it..the making of a scuba diving themed cake. Hope you enjoyed reading about it :)) If you did, you can see and read about another scuba diver themed cake that I made right here, Thanks for reading!

Posted by May M